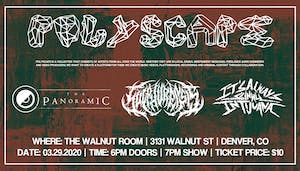 The Panoramic, Sulphurensis, It's Always Sunny In Tijuana

iCal
Google
Polyscape, The Panoramic, Sulphurensis, It's Always Sunny in Tijuana at The Walnut Room

Polyscape is a collective that consists of artists from all over the world. Whether they are in local bands, independent musicians, freelance audio engineers and video producers; we want to create a platform for them. We create Music Videos, Playthroughs, Recordings and Original Content through collaboration.

The Panoramic was formed in the winter of 2012 by drummer Jason Sykes, Guitarist AJ Garner, and Bassist Josh Barratt, later adding Stefan Lopez to the mix. The band’s LP Sacred Anatomy is extremely diverse, ranging from huge melodic chord progressions and guitar solos explored with the band’s newer material to chaotic and unrelenting heaviness that was employed on the band’s earlier work.

5 piece Deathcore band from Denver, Colorado aiming to bring the most energetic and substantial performance not only live but as an audible experience.

It's Always Sunny in Tijuana

It's Always Sunny In Tijuana started in late 2010 in Denver Colorado. Their style started as a straight forward approach to Deathcore. Over the next few years their style has evolved to a diverse mix of Deathcore with a progressive feel. They have matched their writing with a stage presence that sets them apart. Tijuana has shared the stage with Six Feet Under, Revocation, Make Them Suffer, This or the Apocalypse, Those who Fear, Boris the Blade, Kingdom of Giants, Thira, Reaping Asmodeia, Dead for Denver, In Dying Arms, Eat A Helicopter, and Sky Burial. With an EP completed and and Full Length to be released in 2016, they are a heavy hitter that is not soon forgotten.